Vancouver, British Columbia, October 24, 2022 – Kenorland Minerals Ltd. (TSXV: KLD) (OTCQX: KLDCF) (FSE:3WQ0) (“Kenorland” or “the Company”) is pleased to provide an update on exploration activities at the Chicobi Project, located in Quebec, Canada (“the Project”). The Company also announces that Sumitomo Metal Mining Canada Ltd. (“SMMCL”) has fulfilled its requirement to earn a 51% interest in the Chicobi Project and has elected to form a joint venture (“the Joint Venture”).

SMMCL has exercised its option to acquire an initial 51% interest in the Project after recently completing over C$4.9 million in exploration expenditures.  SMMCL has also elected to form a joint venture, and as a result, the Project will be held under a Joint Venture Agreement (“the Agreement”) between SMMCL (51%) and Kenorland (49%).  Under the Agreement, exploration will be funded on a pro-rata basis. Kenorland will remain as operator for the next phase of exploration.

An exploration plan and budget has been approved for an additional C$1.5 million in work which SMMCL will fund on a 100% basis. The exploration plan includes 160 infill sonic drill holes for geochemical sampling along the ‘Roch-Can’ trend.  The Roch-Can trend is located along a major first order structure within the Chicobi Deformation Zone (CDZ) which transects the Abitibi greenstone belt. Limited historical drilling and previously completed sonic drill holes have identified an alteration corridor 17 kilometers in strike length, which is composed of strong sericite-carbonate-silica ± fuchsite-chloritoid alteration associated with a massive to semi-massive sulphide-quartz breccia zone within mafic volcanic-felsic volcanic-clastic sedimentary rock stratigraphy. The planned 160 infill sonic drill holes will cover the 17 kilometer Roch-Can trend, where previously completed wide-spaced sonic drill testing returned anomalous Au-Zn-Ag results in glacial till.

Kenorland, along with SMMCL, has been exploring the Chicobi Project since 2019 using overburden drilling methods to sample glacial till and top of bedrock below the layer of glaciolacustrine clay that obscures vast areas of the northern Abitibi greenstone belt. To date, three phases of sonic drilling, totaling 441 drill holes have been completed across the Project producing ~1,500 samples for gold grain counts, heavy mineral concentrate assays, and till geochemistry assays.

A reconnaissance diamond drill program totalling 1,908m over four holes was completed in April 2022 to test “Target B”, a glacial till multi-element geochemical anomaly.  A single fence of drillholes tested across stratigraphy and interpreted structures up-ice of the geochemical anomaly.  Wide intervals of strong deformation and sericite-carbonate ± chloritoid alteration, associated with localised zones of quartz-carbonate veining and pyrite mineralisation were encountered. The alteration corridor was focused at the south dipping, structurally controlled volcanic-clastic sedimentary rock contact along the CDZ which transects the Chicobi project. While the alteration and mineralisation indicate fluid flow, assays failed to report any precious or base metal concentrations of economic significance.  Exploration will re-focus on further sonic drilling for geochemical sampling along the Roch-Can trend. 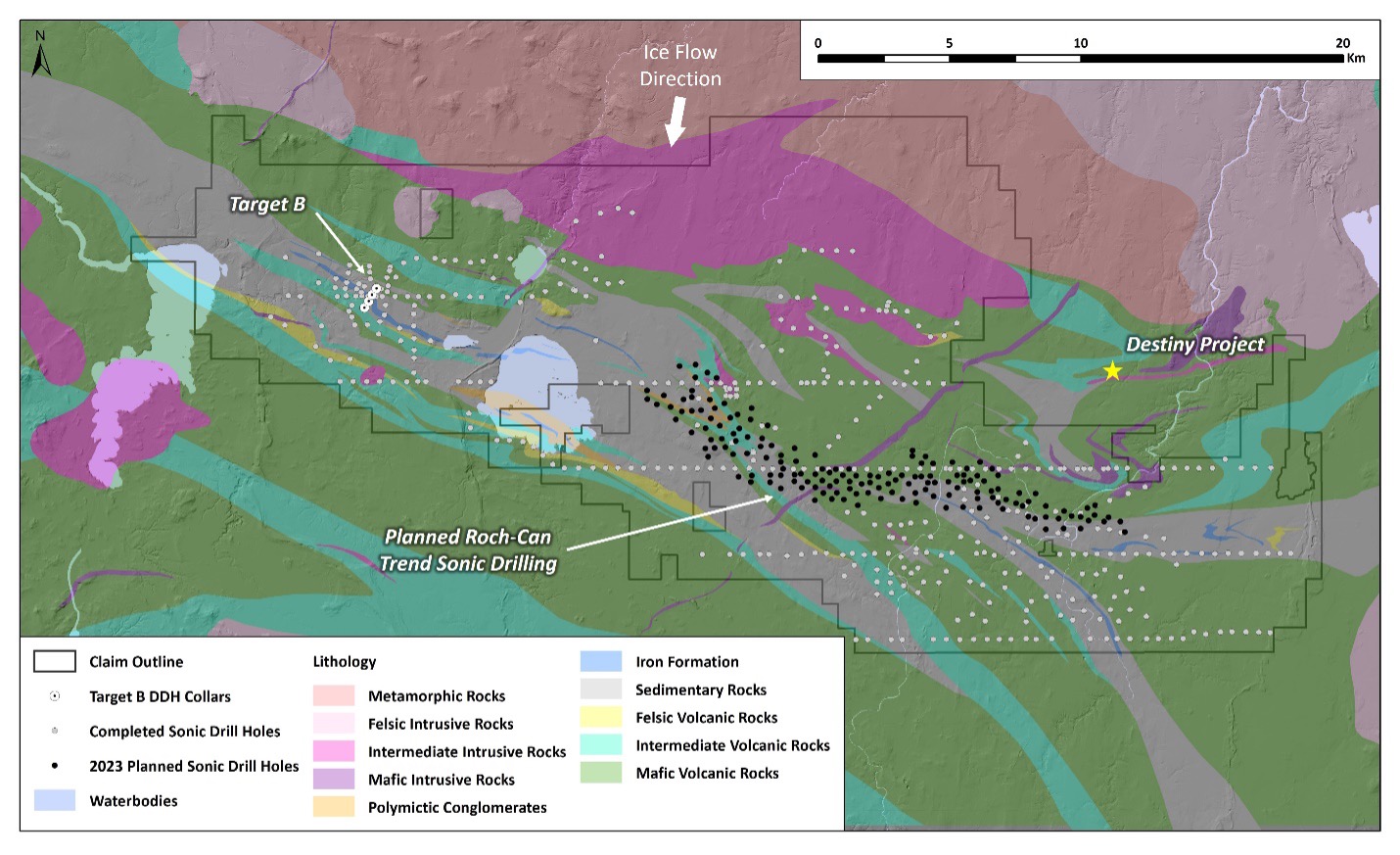 About the Chicobi Project

Figure 2. Location Map of the Chicobi 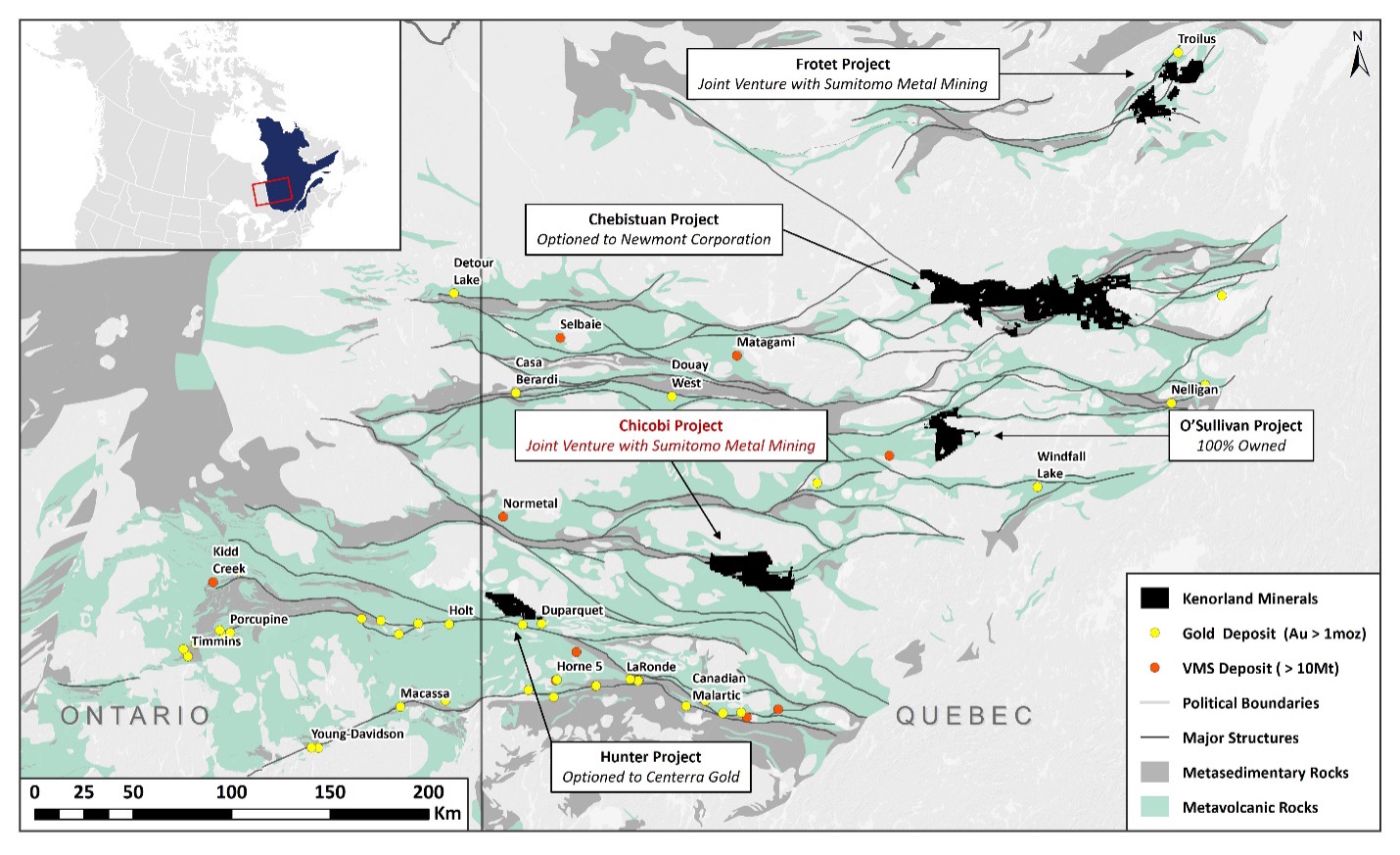 The Chicobi Project covers 51,257 hectares and over 45 kilometers of strike along the Chicobi Deformation Zone (CDZ), a major, yet under-explored structural break transecting the Abitibi greenstone belt of Ontario and Quebec.  Along the strike length of the Project, the CDZ is marked by the juxtaposition of a large sedimentary basin and volcanic packages, and “Timiskaming-type” late-basin polymictic conglomerates. The CDZ is analogous to the other major breaks that host world-class Au deposits of the Abitibi, such as the Cadillac-Larder Lake, Casa-Berardi, and Sunday Lake – Lower Detour deformation zones, and has the potential to host significant orogenic gold and VMS mineralisation.

Janek Wozniewski, B. Sc., P. Geo., OGQ (#2239) is the “Qualified Person” under National Instrument 43-101, has reviewed and approved the scientific and technical information in this press release.

Kenorland Minerals Ltd. (TSX.V KLD) is a mineral exploration Company incorporated under the laws of the Province of British Columbia and based in Vancouver, British Columbia, Canada. Kenorland’s focus is early to advanced stage exploration in North America.  The Company currently holds four projects in Quebec where work is being completed under joint venture and earn-in agreement from third parties. The Frotet Project and Chicobi Project are held under joint venture with Sumitomo, the Chebistuan Project is optioned to Newmont Corporation and the Hunter Project is held under option to Centerra Gold Inc. In Ontario, the Company holds the South Uchi Project under an earn-in agreement with a wholly owned subsidiary of Barrick Gold Corporation.  In Alaska, the Company holds the advanced stage Tanacross porphyry Cu-Au-Mo project, optioned to Antofagasta, as well as a 70% interest in the Healy Project, held under joint venture with Newmont Corporation.