Zach Flood, CEO of Kenorland states, “The maiden diamond drill program confirmed the presence of a large-scale gold system at Healy evidenced by broad mineralisation encountered throughout the wide-spaced drilling across multiple target areas. While there are many indications that Healy represents a significant greenfields gold discovery within Alaska’s prolific Goodpaster Mining District, it will require additional drill testing to fully evaluate the economic potential. We will provide an update on our exploration plans going forward after we have completed a detailed review of the results and targets with Newmont Corporation, who currently holds a 30% participating interest in Healy.”

The 2021 diamond drill program was designed to test three target areas; Bronk, Thor, and Spike, all defined by kilometer-scale coherent Au-As+/-Sb soil geochemical anomalies within a package of dominantly metamorphic rocks including schist, paragneiss and augen gneiss. All drill holes intersected broad low-level gold mineralisation with associated widespread disseminated sulphides, alteration and veining.  Mineralisation is controlled by both early, low-angle east-verging thrust faults, high-angle northeast striking shear zones and major lithological contacts.  The structural setting of the Healy gold system is analogous to other major deposits in the region including Pogo in the Goodpaster District (greater than 8 million ounces of Au endowment), as well as Naosi located in the Richardson District (1.5 million ounces Au inferred resource).  Geochemical associations of gold with silver, antimony and arsenic indicate an overall distal intrusion-related setting for the Healy gold system.

Geophysical imaging of the Healy property was achieved with deep-seeing Titan™ IP and MT surveys (induced polarization and magnetotellurics), transecting five kilometers across the three target areas where drilling was conducted. The surveys were carried out towards the end of the field season due to contractor availability. The IP and MT surveys, which imaged up to 800 meters and 4 kilometers depth respectively, support the presence of shallowly dipping, east-verging architecture with mineralisation occurring along low angle thrust faults and steeper cross-cutting fault corridors. Broad zones of disseminated sulfide and strong alteration are well-defined in the chargeability and resistivity data with zones of combined high chargeability and low resistivity (high conductivity) correlating well with mineralised intercepts from the 2021 drill program. The imaging of additional strongly conductive and chargeable zones, between drilled prospects, highlight significant exploration targets which warrant follow-up drill testing. 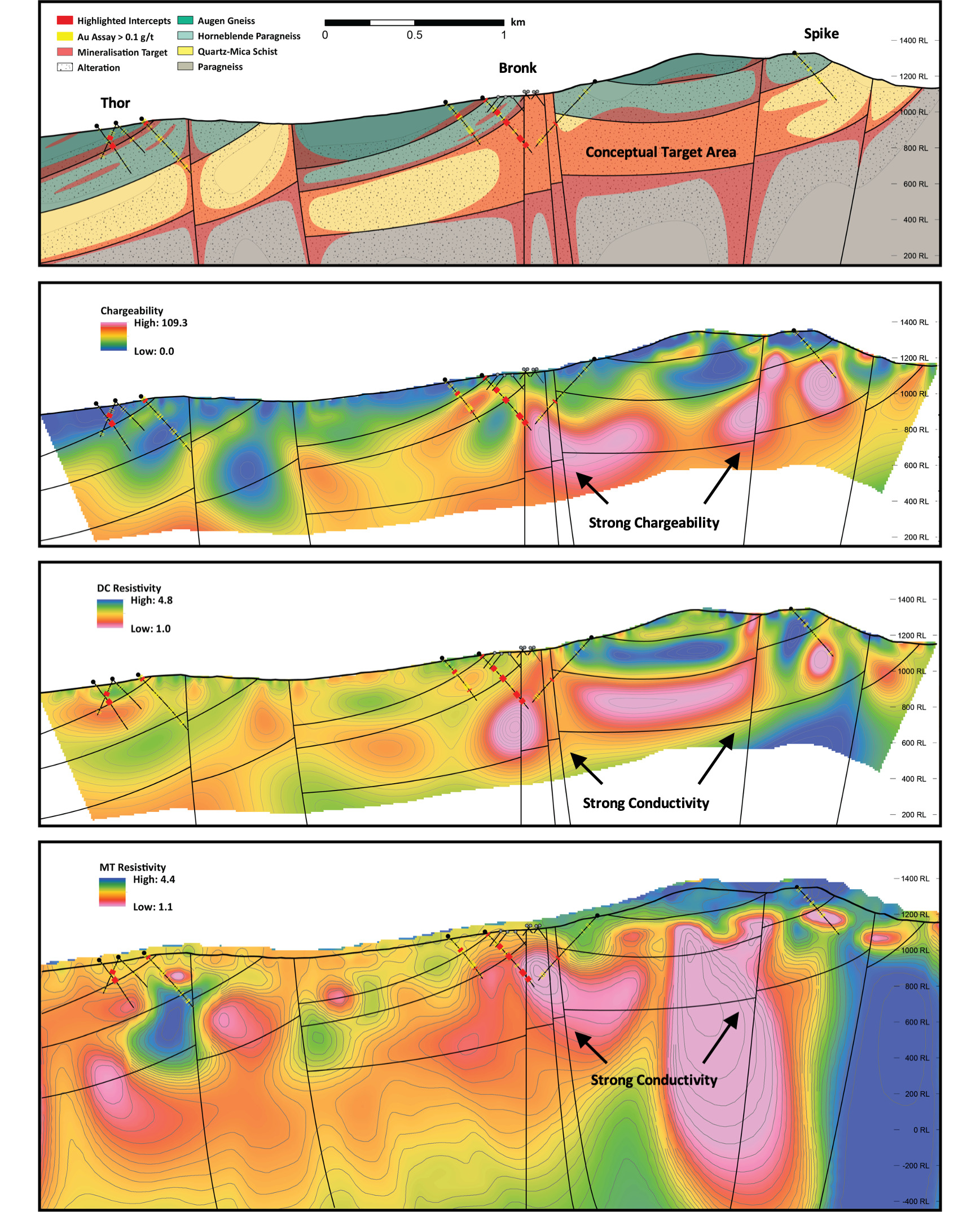 Mineralisation styles at Healy include disseminated sulphide, vein-hosted sulphide, and breccia-fill sulphide including arsenopyrite, pyrite, and stibnite with rare sphalerite. Pervasive alteration is dominantly sericite, carbonate with lesser fuchsite associated with structural features. Veins typically occur as sheeted to stockwork cm-scale quartz-carbonate. Gold-silver and arsenic-antimony ratios are highest within disseminated mineralisation at the Thor prospect in the west while the sulphide breccia-fill mineralisation at Bronk has distinctly higher silver and antimony, representing a broad geochemical zonation from more proximal to distal setting. Gold mineralisation and alteration occurs over a four-kilometer by two-kilometer footprint demonstrating extensive fluid flow associated with a significant gold system. 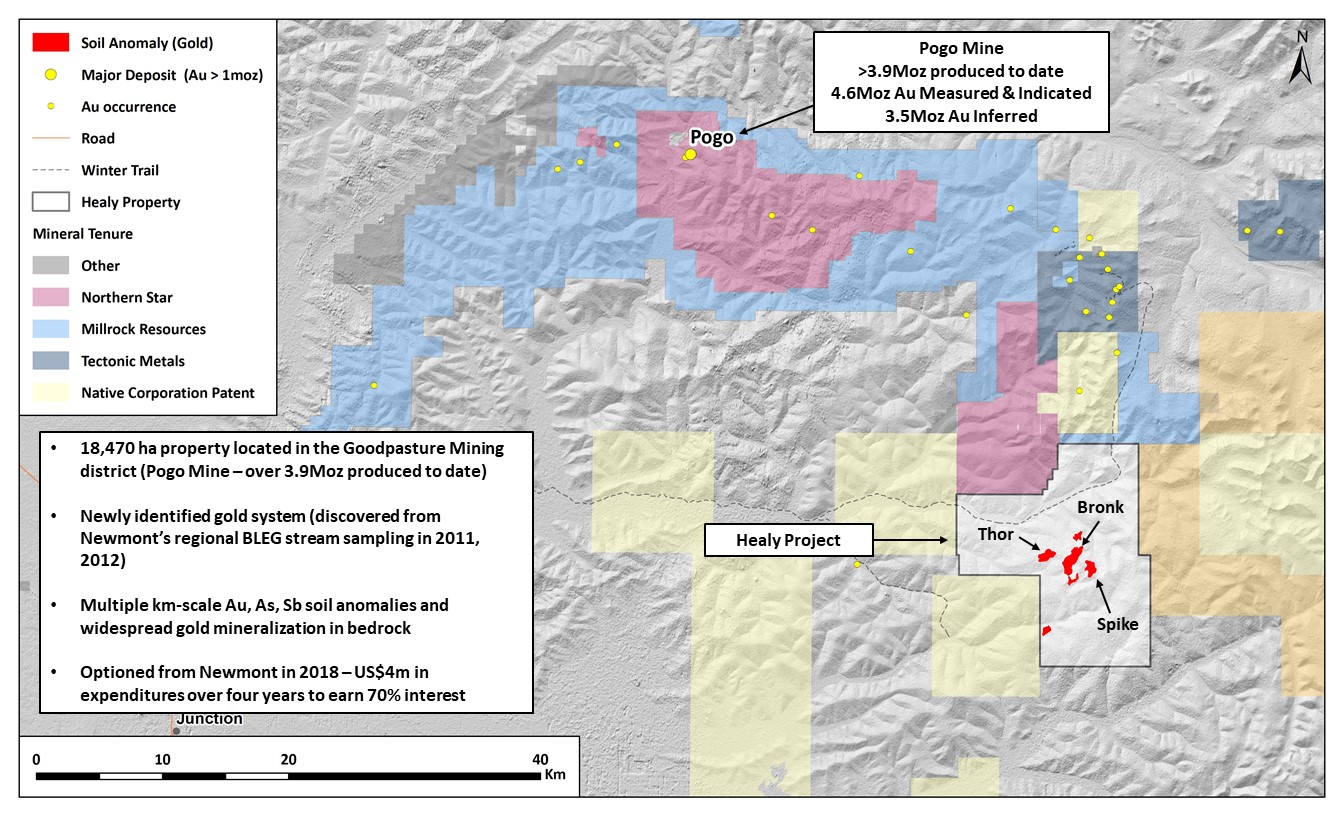 About the Healy Project

Located in the prolific Goodpaster Mining District of Alaska, home of the Pogo gold mine, the Healy Project covers 18,470-hectares of Alaska state mining claims. The Healy Project was first identified and staked by Newmont Corporation in 2012, following a two-year regional stream sediment sampling program in eastern Alaska. Follow-up prospecting, mapping and systematic soil sampling defined multiple kilometer-scale gold, arsenic and antimony in soil geochemical anomalies. The Project is located along a major northeast trending fault system, as well as the prospective regional contact between metasedimentary rocks and Cretaceous intrusive rocks, similar to the neighbouring Pogo and Tibbs areas. The property scale structural geology is defined by numerous low-angle thrust faults cut by steeply dipping northeast trending faults. Gold anomalism is spatially associated with both steeply dipping faults and low angle thrust faults. No recorded exploration work had been done on the Healy Project prior to Newmont in 2012 and 2013. In 2018, Kenorland Minerals (formally Northway Resources Corp.) entered into an option agreement with Newmont and has now completed its Phase 1 Earn-in minimum work expenditures of US$4m for which it has earned a 70% interest in the Healy Project.  Joint funding has commenced whereby Kenorland and Newmont are participating on a pro-rata basis of 70% and 30%, respectively.

Figure 6. Location of the Healy Project

All drill core samples were collected under the supervision of Kenorland employees. Drill core was transported from the drill platform to the logging facility where it was logged, photographed, and split by diamond saw prior to being sampled. Samples were then bagged, and blanks and certified reference materials were inserted at regular intervals. Groups of samples were placed in large bags, sealed with numbered tags in order to maintain a chain-of-custody, and transported from Delta Junction to a Bureau Veritas Commodities laboratory in Fairbanks, Alaska. Samples were prepared for analysis according to BV method PRP70-250 where samples were crushed to 2mm and a 250g split was pulverized for analysis and then assayed for Gold. Gold in samples was analyzed by fire assay with AAS finish and over-limits re-analyzed gravimetrically. In zones with macroscopic gold the samples were first screened, and the fine fraction was fire assayed with AAS finish. Multi-element geochemical analysis (45 elements) was performed on all samples using BV method MA200 where a 0.25g split is heated in HNO3, HClO4, and HF to fuming and taken to dryness. The residue is dissolved in HCl and analyzed by a combination of ICP-ES/MS. All results passed the QAQC screening at the lab, all company inserted standards and blanks returned results that were within acceptable limits.

Mr. Jan Wozniewski, B. Sc., P. Geo., OGQ (#2239) is the “Qualified Person” under National Instrument 43-101, has reviewed and approved the scientific and technical information in this press release.

Kenorland Minerals Ltd. (TSX.V KLD) is a mineral exploration Company incorporated under the laws of the Province of British Columbia and based in Vancouver, British Columbia, Canada. Kenorland’s focus is early to advanced stage exploration in North America.  The Company currently holds four projects in Quebec where work is being completed under joint venture and earn-in agreement from third parties. The Frotet Project is held under joint venture with Sumitomo Metal Mining Co., Ltd., the Chicobi Project is optioned to Sumitomo Metal Mining Co., Ltd., the Chebistuan Project is optioned to Newmont Corporation, and the Hunter Project is optioned to Centerra Gold Inc. In Ontario, the Company holds the South Uchi Project under an earn-in agreement with a wholly owned subsidiary of Barrick Gold Corporation.  In Alaska, USA, the Company owns 100% of the advanced stage Tanacross porphyry Cu-Au-Mo project as well as a 70% interest in the Healy Project, held under joint venture with Newmont Corporation.