Vancouver, British Columbia, November 14, 2022 – Kenorland Minerals Ltd. (TSXV: KLD) (OTCQX: KLDCF) (FSE:3WQ0) (“Kenorland” or “the Company”) is pleased to announce final drill results from the 2022 summer drill program at the Frotet Project, (“the Project”), located in northern Quebec and held under joint venture (“the Joint Venture”) with Sumitomo Metal Mining Canada Ltd. (“SMMCL”). Assays from 23 drill holes (11,903 meters) completed at Regnault along with 8 drill holes (2,511 meters) completed at Cressida are reported herein. The Company is also pleased to provide an update on its plans for future exploration activities at the Project.

Figure 1. Plan map of Regnault drilling including highlights from the 2022 summer drill program 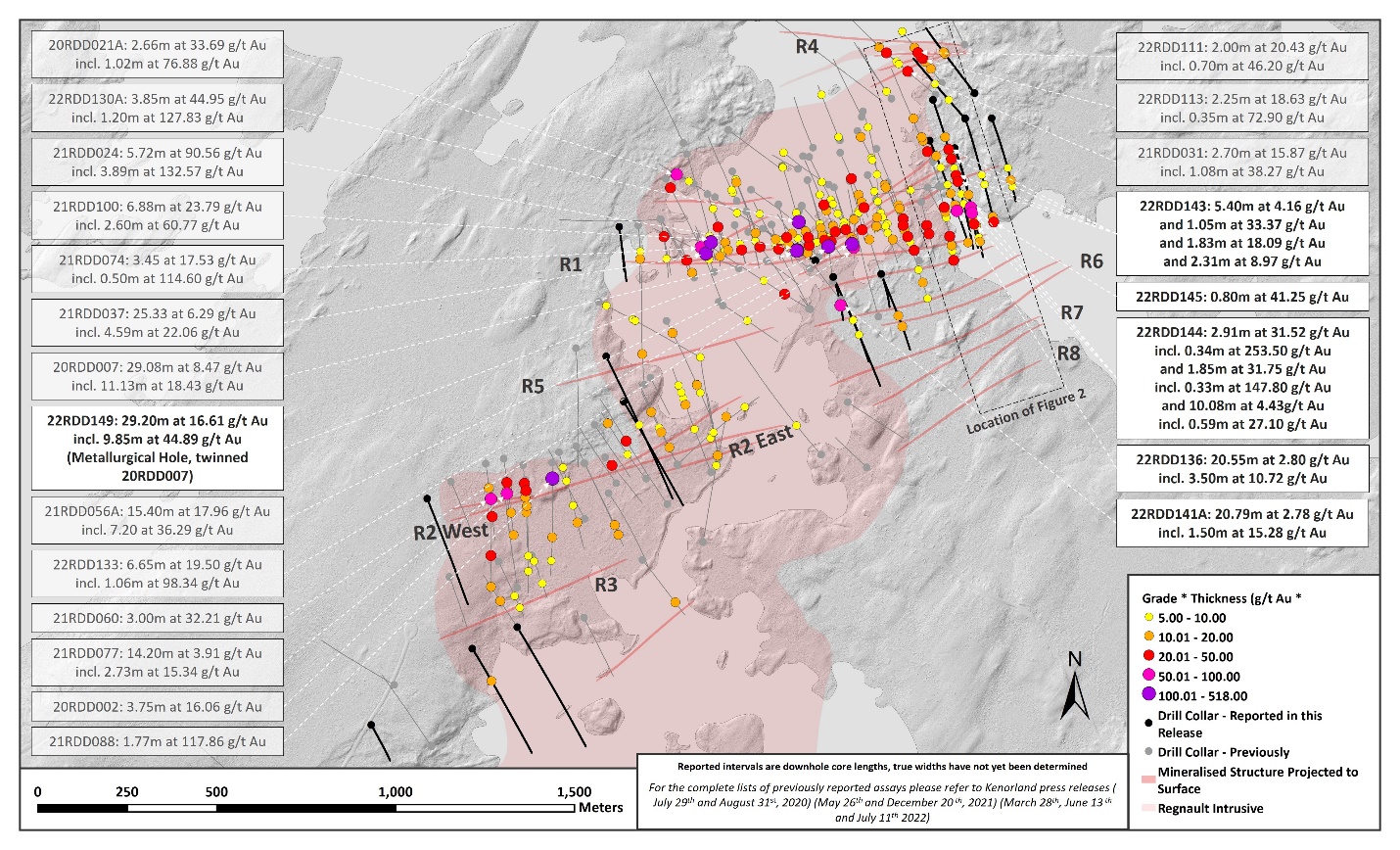 Zach Flood, President and CEO of Kenorland commented, “the summer drill programs at the Frotet Project were a great success.  At Regnault we have extended the R1 system over 100m to the east, for a total of over one kilometer of strike, remaining open. We have also begun to prove continuity along the recently discovered parallel vein structures, including R5, R6, R7, and R8, located just to the south of the R1.  At the Cressida Target, our maiden drill program discovered gold mineralisation over three kilometers away and along strike from Troilus Gold’s Southwest Zone.  We anticipate the next phase of exploration in Q1 2023 to include up to 25,000m of drilling at Regnault which will be primarily focused on additional step-outs on the R1, R5, R6, R7, and R8 veins, as well as deeper drilling to test for additional parallel vein structures.”

11,903m of diamond drilling, including 23 drill holes, was completed at the Regnault discovery.  Drilling was mainly concentrated along the eastern margin of the intrusive complex targeting step-outs along the R1 shear zone, the R4 veins, and the newly discovered vein corridors to the south of R1 including the R5, R6, R7 and R8 vein sets.

Along the R1 trend, highlights include hole 22RDD143 which stepped 200m to the east of 22RDD131 (2.90m at 4.75 g/t Au*) and intersected 5.40m at 4.16 g/t Au and 1.05m at 33.37 g/t Au. Hole 22RDD143 is one the deepest and most eastern drill holes completed to date along the R1 trend. The summer drill program has extended mineralisation at R1 over 100m to the east for a known strike length of 1050m and to depths of 400m, demonstrating the potential for continued extension of high-grade mineralised structures within the east dipping Regnault diorite intrusive. 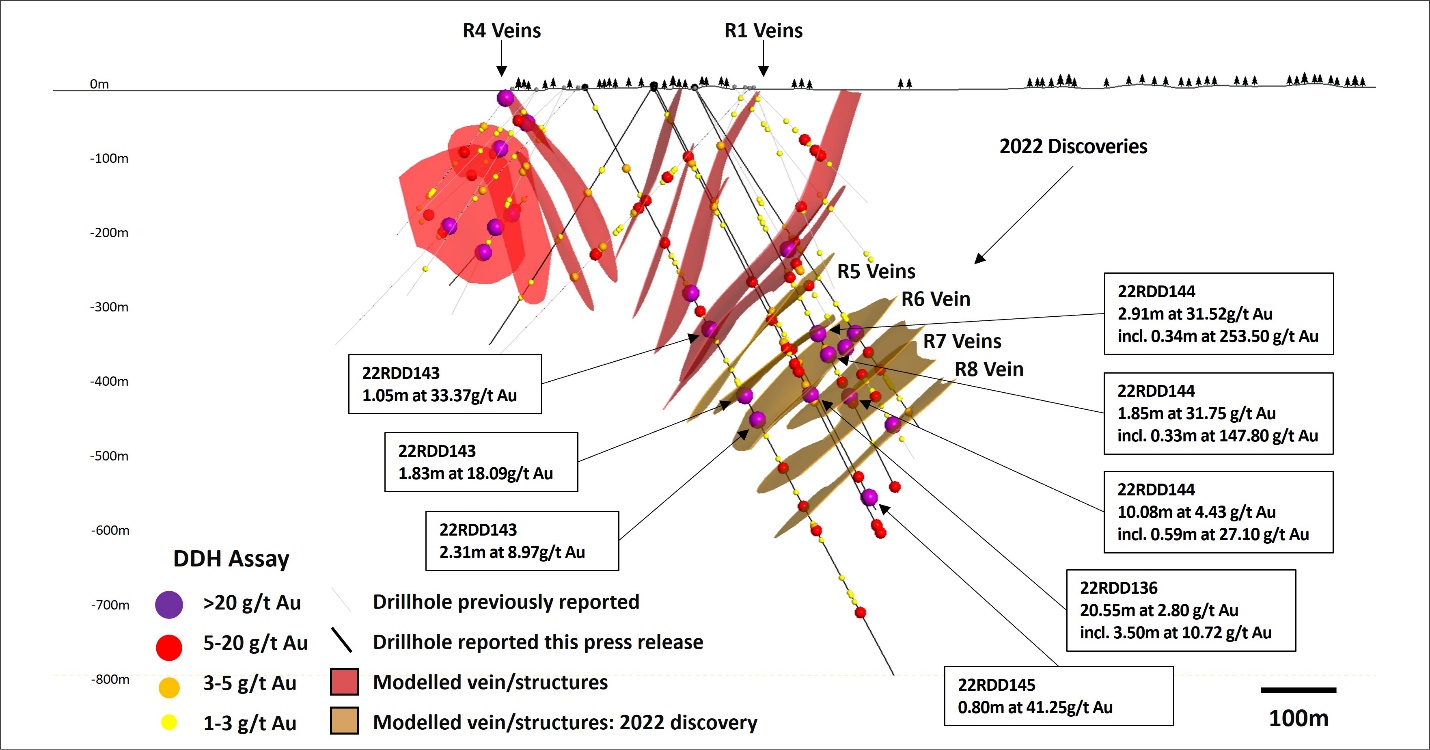 Drilling also extended known high-grade mineralisation towards the west along the R7 and R8 vein sets. Along the R7 vein, hole 22RDD141A which stepped 250m to the west of 22RDD129 (20.20m at 0.99 g/t Au**) intersected 20.79m at 2.78 g/t Au including 1.50m at 15.28 g/t Au. Drilling completed during the 2022 summer drill program along the recently discovered R5, R6, R7 and R8 vein sets extend the strike length of the mineralised structures to 600m, and to depths greater than 600m, representing the deepest significant mineralisation intersected at Regnault to date, remaining open along strike and at depth. 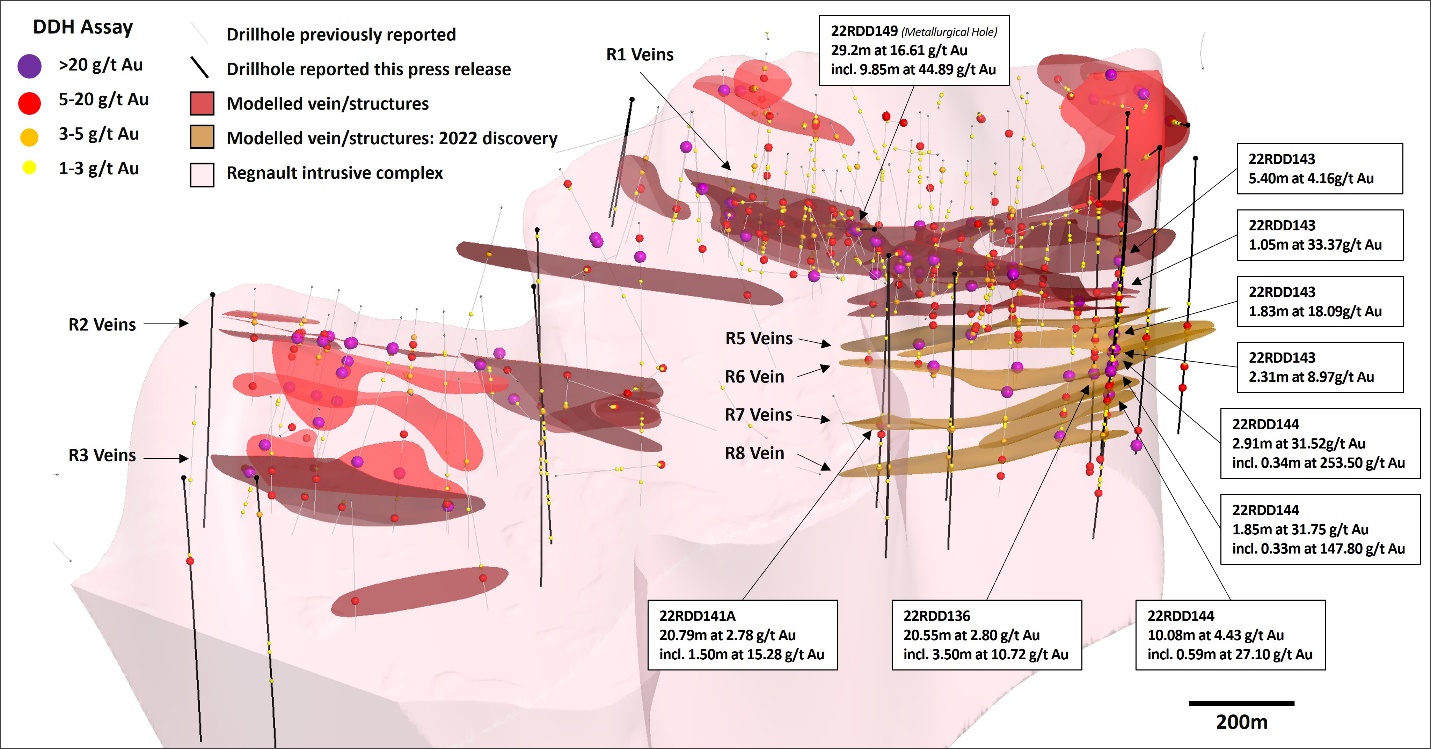 2,511m of drilling between 8 drill holes were completed at the Cressida Target area, located within the northwestern portion of the 39,365 hectare property. The Cressida target is located directly along strike and within the main mineralised corridor hosting the former producing Troilus Gold Mine, currently being explored by Troilus Gold Corp. The Cressida target is located between and along strike of Troilus Gold’s Southwest Zone (2,700m to the northeast) and their recently discovered Beyan Gold Zone (3,000m to the southwest).

Figure 4. Plan map of Cressida drilling including highlights from the 2022 summer drill program 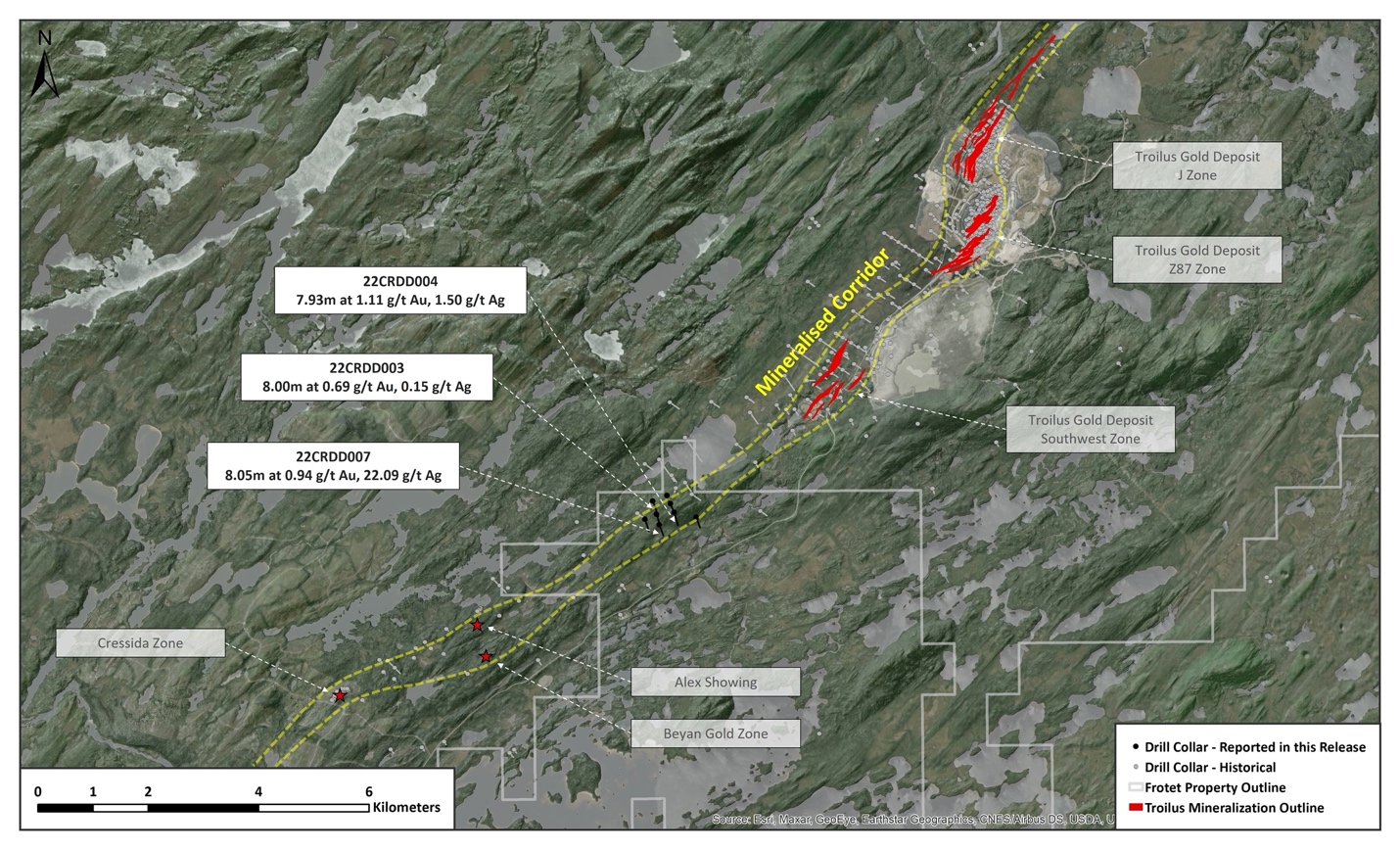 The Joint Venture is anticipating an upcoming 2023 winter drill program at Regnault which will include up to 25,000m of diamond drilling. This program will represent the second phase of the fiscal 2022 exploration budget (see press release dated May 3, 2022) and the largest single drill program undertaken on the Regnault discovery to date.  Drill targeting will be focussed on broad step-outs to extend the strike length and depth of recently discovered vein sets to the south of the R1 vein system.  Priority targets will include stepping out on the R5 veins and testing the 475m gap zone between the R2-R3 shear hosted mineralised veins and the R6-R7-R8 mineralised structures. Drilling is expected to begin late January and continue through March with four drill rigs.

Table 1. Table of results from the 2022 summer drill program

About the Frotet Project

The Frotet Project was first identified by Kenorland in 2017 after completing a regional prospectivity study over the Abitibi and Frotet-Evans Greenstone Belts of Quebec. The initial 55,921 ha property was acquired through map staking in March, 2017 and optioned to Sumitomo Metal Mining Canada Ltd. (“SMMCL”), a wholly owned subsidiary of Sumitomo Metal Mining Co., Ltd. in April, 2018. Two years of property-wide systematic till sampling led to a maiden drill program in 2020 which resulted in a significant grassroots discovery at the prospect now named Regnault. The project is currently under the Joint Venture agreement between SMMCL and Kenorland Minerals Ltd., with interests being held at 80% and 20%, respectively. Under the Joint Venture, exploration is funded pro-rata and Kenorland is presently the operator of the project.  Any party which does not contribute and is diluted below a 10% interest, converts its interest to an 2% uncapped net smelter royalty. 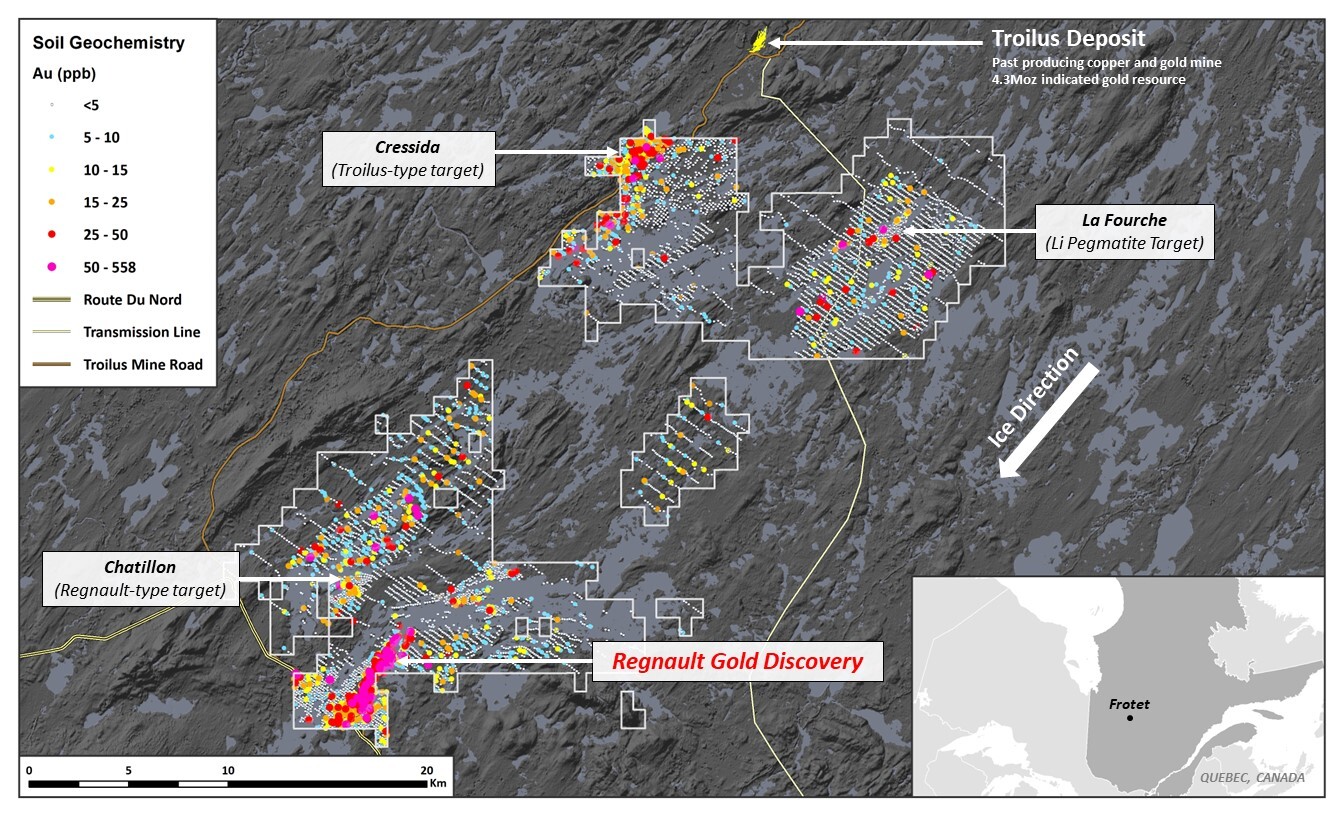 All drill core samples were collected under the supervision of Kenorland employees. Drill core was transported from the drill platform to the logging facility where it was logged, photographed, and split by diamond saw prior to being sampled. Samples were then bagged, and blanks and certified reference materials were inserted at regular intervals. Groups of samples were placed in large bags, sealed with numbered tags in order to maintain a chain-of-custody, and transported from Chibougamau to BV laboratory in Timmins, Ontario.

Janek Wozniewski, B. Sc., P. Geo., OGQ (#2239) is the “Qualified Person” under National Instrument 43-101, has reviewed and approved the scientific and technical information in this press release.

Kenorland Minerals Ltd. (TSX.V KLD) is a mineral exploration Company incorporated under the laws of the Province of British Columbia and based in Vancouver, British Columbia, Canada. Kenorland’s focus is early to advanced stage exploration in North America.  The Company currently holds four projects in Quebec where work is being completed under joint venture and earn-in agreement from third parties. The Frotet Project and Chicobi Project are held under joint venture with Sumitomo, the Chebistuan Project is optioned to Newmont Corporation and the Hunter Project is held under option to Centerra Gold Inc. In Ontario, the Company holds the South Uchi Project under an earn-in agreement with a wholly owned subsidiary of Barrick Gold Corporation.  In Alaska, the Company holds the advanced stage Tanacross porphyry Cu-Au-Mo project, optioned to Antofagasta, as well as a 70% interest in the Healy Project, held under joint venture with Newmont Corporation.